As mentioned in the Thrill is Gone, I am temporarily restricted to a bland diet and determined to soldier through to better days. In the meantime, while I may not be able to indulge, my memory is free to enjoy memorable meals of the past. One of our memorable meals was a Franco-American Thanksgiving on Île de la Cité.

Traveling in November is a roll of the dice, but if our number comes up it is a great time to visit Europe; the sites, museums, and restaurants are a bit less crowded and everything a lot quieter and peaceful in the soft winter light. A bit risky, but it can be a wonderful time to travel if Momma Nature and the Travel Gods are on our side. While late November can be one of the busiest travel times of the year in the states, Thanksgiving is virtually unknown in Europe save for ex-pats and the people who are lucky enough to befriend them. Likewise with shopping in November, no crowds before Thanksgiving rushing to markets and grocers, no crowds after Thanksgiving sprinting full speed ahead into the Christmas rush. It is a quiet time in Europe, a bit before the Christmas markets open and long after the summer tourists have returned home.

One November we joined with friends and found a wonderful apartment on Île de la Cité overlooking the busy Seine and Hôtel de Ville. Centered in the middle of the most touristy of Paris, we had wonderful places to explore in all directions–and we did–but one of our favorite things was to sit at the window and watch the boats go by from the early morning commercial river traffic to the busy tourist boats that drifted by throughout the day, the dusk, and into the twinkling lit darkness of evening. It was the perfect place to take a break for lunch in the middle of the day, we were never far from our local home for a simple luncheon with a remarkable view. 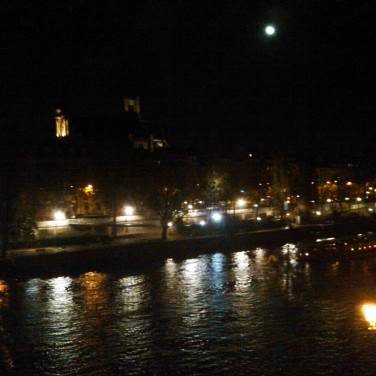 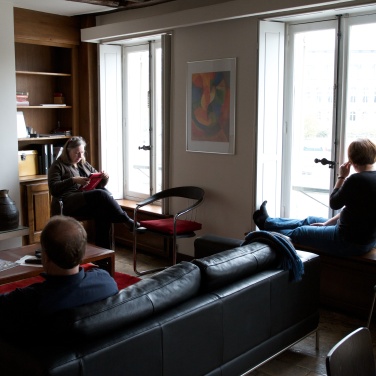 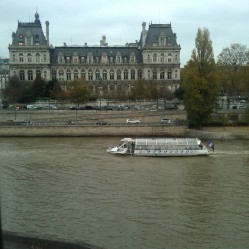 The kitchen was small but our dining table was quite large, a bit challenging for cooking but a perfect place for entertaining. With plenty of seating at the table we were able to increase our number with an assortment of guests, our nephew who was studying in Paris that year, our daughter and her British friend who joined us from Germany, and finally a chef acquaintance of our friends, who happened to be in Paris with his daughter and a friend, completed the guest list.

With a challenging kitchen–very limited counter space, tiny refrigerator, and a small oven–we had to plan our feast accordingly. We were familiar with the local wine, produce, butcher, and cheese shops in the neighborhood but we needed more selection than could be found in our immediate area to create a Thanksgiving. We branched out to other neighborhoods looking for oddities.

Not trusting I could find canned pumpkin and condensed milk in Paris, I brought a couple of cans with me along with some decent knives; one is less likely to find good knives in a rental apartment than cans of Libby’s pumpkin in Paris. Not surprisingly, the kitchen–although fairly well outfitted–did not have pie pans. No problem, we were across from a large BHV department store and not too far away from cookware shops in Les Halles.

We found fabulous cookware and housewares departments in the BHV, and did pick up a few things, but not pie pans. To say we picked up a few things fails to relate how perplexed we were shopping in this store. We had a total failure to communicate, and not just with the language. We gathered our goods and stood in line for the cashier waiting to check out. When we reached the front of the line, the woman would not ring up our purchases. Our French was not good enough to gather more than the emphatic “No” and we were quite at a loss as to why she refused to sell us the items we had gathered. It was not until we found a salesperson on the floor who had enough English to explain the proper way to purchase our goods that we were able to have any success. Our instructions were to leave the goods in the department, have a salesperson on the floor write a ticket, take the ticket to the cashier, stand in line (again), pay the amount on the ticket, have the ticket marked as paid, return to the department where the goods remained on the shelves, find the salesperson and give him or her the ticket, wait patiently as he or she collected the goods and wrapped them for carry-out, and finally, after all that, would we be able to leave with the goods.

We wandered through a cookware shop with a large baking section in Les Halles, but no pie pan. Surely, we thought, the very famous Julia Child recommended shop, E.Dehillerin, would have pie pans. E.Dehillerin did have about every type of cookware and bakeware one could imagine, including pots big enough to seat all of our guests, but no pie pans. It was a multi-level, floor to ceiling treasure hunt that turned up many a treasure save the one we were looking for. Sighing with the thought of all those disposable aluminum pie tins hanging in displays in the states, I belatedly thought how easily a couple of aluminum pie tins could have joined my cans for the transatlantic journey. Well, this was Paris so citrouille tarte it would be.

Having resolved to make a tart and giving up the pie pan search, I realized we that while we had a tart pan we had no pastry making equipment. We would not mind searching  La Grande Épicerie de Paris for pre made tart shells but were fortunate to find a smallish supermarket nearby that had “bio” savory tart pastry in a roll, similar to the Pillsbury pie crusts found in the refrigerated section in grocery stores at home but made from all natural ingredients. It was pretty close to as good as we could have made if we had counter space, pastry boards, mixing bowls, and rolling pins. Heavy cream, no problem. Our plans and ingredients for pumpkin pie, or rather tart, all present and accounted for. 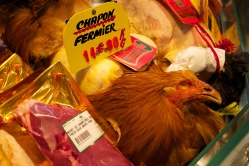 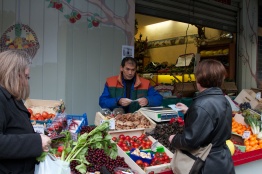 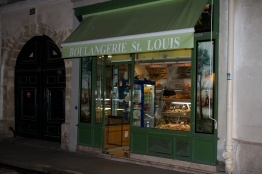 The produce store nearby was good but selected our produce for us, it was strictly hands-off and all transactions took place in French or by pointing and holding up fingers; a bit difficult when one has limited French and a long list of produce to purchase. The first time in the shop I had learned the moment my fingers reached for a tangerine that I had done the unthinkable. My husband entered a few minutes later and began to reach for a piece of fruit and I cried, “NOOOOO, don’t touch it!” just in time to prevent another international incident. The produce store we found in Saint Germain was a bit more relaxed and we could select on our own produce or get assistance. There we found a bag of Ocean Spray fresh cranberries and as soon as I had them in hand, an assistant was by my side helping me find everything on my laboriously translated-into-French shopping list. He even asked how many stalks of celery we needed for our stuffing and tore off just the amount we needed, no leftovers to worry about shoving into that tiny refrigerator. Sage was the problem as my translator had given me the translation for a wise guy, not an herb, but he stuck with me until we figured it out and we eventually found it.

In the days leading up to Thanksgiving, we saved bits of baguettes from our meals to put toward the stuffing and had our plan for bread cubes. With the help of the produce man, we now had celery and sage, which left ground sausage for the stuffing. It is easy enough to find stuffed sausages of many varieties, but bulk sausage was not so easily found. We were able to find bulk sausage at the butcher next to the produce market. They quickly recognized why we were shopping and tried to sell us a turkey. It was tempting, until I remembered the size of the oven. They did, however, have a rotisserie filled with golden juicy chickens turning round and round. Even better, the slow roasted chickens were situated over roasted potatoes, potatoes which were probably already well laden with butter but now saturated with juices from those chickens. There is always mashed potatoes and gravy at this feast, but those flavor enriched potatoes erased all thoughts of that tradition. Our dinner shopping was complete, save a bit of shopping for wine–anything but a challenge in Paris–and fresh bread pulled from the oven hours before the feast.

On Thanksgiving, we sent a crew out to pick up chickens and potatoes while we made all the trimmings, rotating things in and out of the small oven beginning with our pumpkin tart-not-pie. We baked our stuffing in broth after cubing the saved bits of baguettes and tossing them with the sautéed onions, celery, sausage, and sage. Yes, we learned, baguettes do make wonderful bread cubes for stuffing. We cooked up some cranberry sauce with a bit of freshly squeezed orange juice and prepared haricot vert with mushrooms for our final side dish.

We had a lot of wine at the ready, and as every guest also brought wine, many bottles of regional French wines were opened, passed around, and enjoyed. Having a guest chef in the mix turned out to be an excellent idea, not only for the quality of wine he brought but also for his expertise in carving those chickens up faster than we could open a bottle of wine. 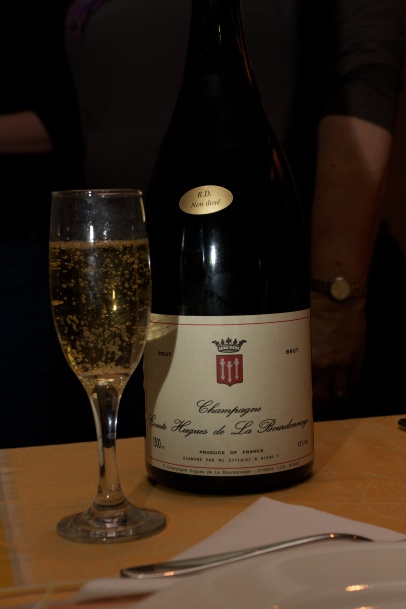 With the view of the Seine visible through the windows, we sat down to a memorable feast. Although missing a few of the traditional dishes and family back in the states, it was not lacking in the things that Thanksgiving is known for: beloved family, good friends, good food, good wine, and the thankfulness to be in this place, at this time, and sharing it with these people.

Photo credit for many of the photos to the spouse (everyone has a job in the kitchen, someone had to take pictures while the others planned, shopped, and cooked).