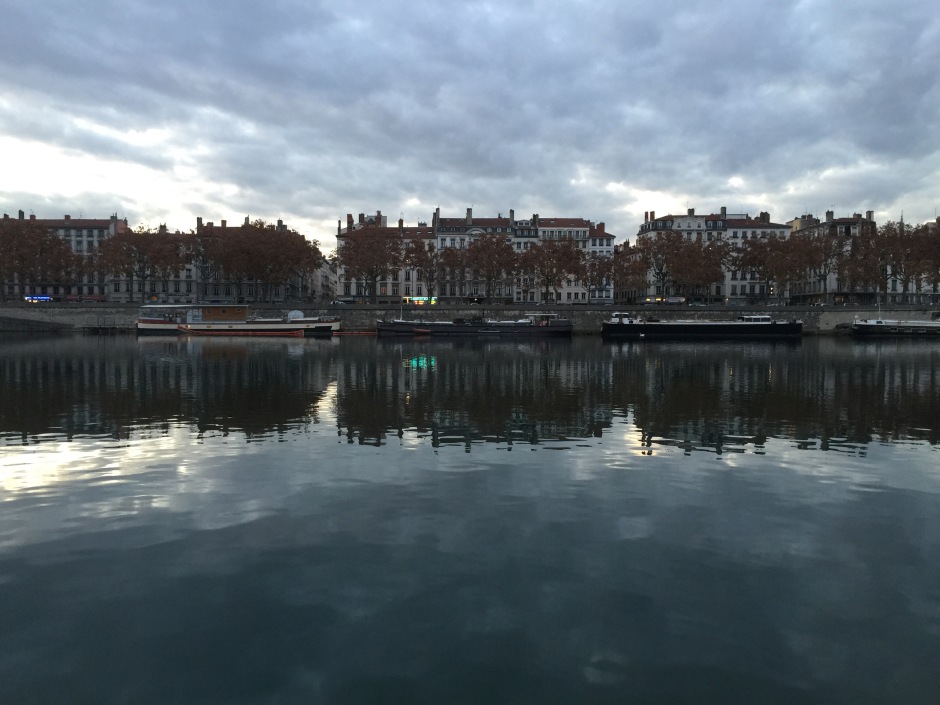 On Friday the 13th of November 2015, Paris was viciously attacked by terrorists. On that day we were grieved by the events, we were also packing for a flight from the states to France amidst the uncertainty of closed borders and increased alerts. On the 14th, we flew to France via Germany. Our flight from Frankfurt was delayed as all passengers were individually screened by a quartet of German police at departure and by French police doing passport checks at arrival. We arrived to a somber country in the midst of a three day mourning period. Even after the days of mourning had passed, we saw increased vigilance, armed policemen, museum and monument closures due to lack of security officials to guard the most visited places, and impromptu memorials set up on town hall steps in villages, towns, and cities.

We also saw something else. The French being the French, carrying on as always, doing what they do day to day. Egocentric perhaps, but we felt that by not cancelling our trip–which many tourists did in the immediate aftermath of the attack–that we showed our solidarity simply by being there and engaging with the French people and their culture in spite of everything. In truth, there were moments when we forgot the somber atmosphere in which we moved about, but for the most part the weight of that horrible event accompanied us wherever we went. Hearing Ma Vie en Rose performed was an emotional moment, and with hearing it the thought occurred to me that no matter what befalls it, France will always be France. We were privileged to join France in her time of loss and uncertainty, we gained certainty in who they are and always will be. 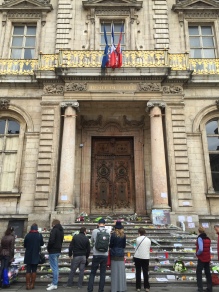 Lyon, as with other cities, towns, and villages, had flags rolled up–their version of flags at half mast–at their Hotel de Ville [city hall] and the steps were filled with candles, flowers, and offerings in a makeshift shrine. This was not the only time Lyon has felt oppressive fear and loss. We visited the Resistance and Deportation History Centre, a reminder of another black period Lyon endured. The Butcher of Lyon once held sway here and many people did not survive that occupation, those who did will never forget. We visited tiny alleyways and hidden streets in the old town, once of use to the French Resistance. But, for all the reflective and somber sites, Lyon is a showcase for what it is known for, food. 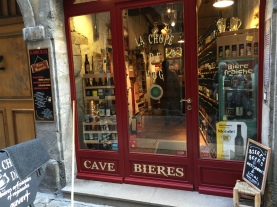 While it can be debated which city or region boasts the best cuisine, Lyon certainly embraces a reputation for gastronomy and producing Michelin star chefs. As with any city in France, there are restaurants that would cost more Euros than what we could get for selling our first born child combined with her college tuition. Still, when in Lyon dining out seemed the thing to do. A group of people who were on our river cruise, a couple we knew from another trip and one we had just met, joined together for a meal to remember. The couple we had recently met had done research and graciously extended the invitation for us to join them at a restaurant known for training great chefs, including Paul Bocuse. The restaurant, La Mère Brazier, was founded in 1921 by Eugénie Brazier, the first woman to receive three Michelin stars. The current owner of this now two star restaurant is chef Mathieu Viannay. As we were to discover, he has kept the classic and quiet feel of the iconic restaurant.

We had walked all morning and, with a help of a little city map, found our way to a quiet side street on what seemed to be the edge of the city center. We were warmly greeted and taken upstairs to a semi-private dining room, just one other table and that table quite a distance away from us. The friends we had met earlier are food lovers, our new friends were less experienced but no less enthusiastic. One gamely tried pâté for the first time, and having decided once was enough left more for the rest of us to enjoy. It seemed like a good idea at the time, but as course after course came out those extra servings of pâté laid a base of rich food we had better done without. 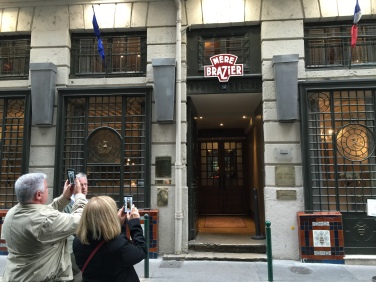 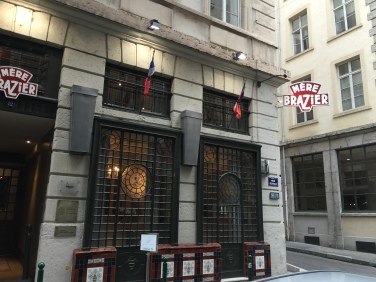 Every course was small, very small by American standards, but the sheer number of them added up to a belly that felt like it had just endured a Thanksgiving feast. By the time the soufflé came, a crispy cloud with a foamy, warm, moist, delicious interior, we were wondering where to put it while at the same time unable to stop eating one of the most delicious things ever to be carried by spoon to mouth. And spoon it I did, mouthful after mouthful, and still there was much of that massive crispy cloud confronting me. When one after the other of us put our spoons down and admitted defeat, we pushed back a bit from the table and stared balefully at our partially eaten soufflés knowing we were done for the day. It was at that moment that our server came to the table and said firmly, to our utter surprise, “No, you are not done yet.” Every last person at the table was stunned and horrified, our faces a mask of confusion and fear. The mark of a fine restaurant is providing an enjoyable and satisfying dining experience for the customers, and this was a fine restaurant intent on making their guests content. The server, marking the look of horror in our eyes, released us from our fate of confronting still more plates. We were let go with a round of coffee and a shared plate of chocolates, none of which we could eat but a few of which we nicked for later.

With the magic of a wonderful meal, our group was convivial and relaxed as old friends by the end of the long lunch. After our extended time gathered about the table, we walked a couple of miles to our temporary travel home, a slow trudge back with a full belly. It was the best thing for us after our encounter with Lyon gastronomy, to walk it off. And what an encounter. The service throughout was attentive, courteous, and informative. The ambiance was quiet, elegant, and classic. The food was as fabulous as it was abundant. The tab, albeit in the category of splurge but not at the cost of a first born child, was worth every Euro for the experience we had and the memories we keep. This day, as with other days on this trip to France, was under the cloud of resolve, vigilance, and grief following the recent horror in Paris, but like the everlasting clouds of beautiful soufflés, France is and will be France.