On a rainy Saturday in Lexington, we ventured out to the Kentucky Sheep and Fiber Festival and the Bluegrass Classic Stock Dog Trials held in Masterston Station Park for a day of beasties, fleeces, fibers, and gizmos. 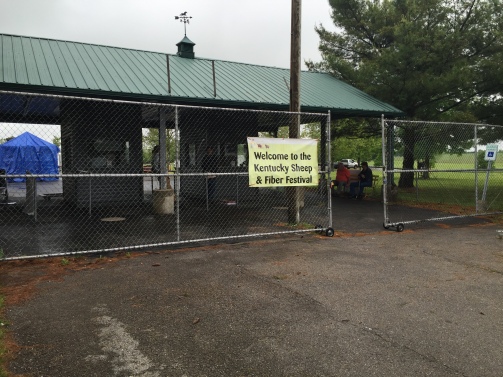 Traveling with an uniKNITiated muggle to a fiber fair is a very different experience from going to a fiber event with a fellow knitter. Long leisurely hours of petting fiber and oohing and ahhing over colors and textures was not an option. However, we did find lots of animals–just about everyone likes animals–including alpaca, goats, sheep, and rabbits and the camera wielding spouse had a good time with the beasts of fiber. There was not a lot of visitor interaction with the penned animals but they did have ongoing sheep sheering demonstrations and sometimes animals were outside their pens and available for holding or petting.

For those more interested in seeing how things work than in admiring lovely skeins of yarn there were lots of gizmos: hand crafted or precision machined equipment developed for carding, spinning, weaving, skeining, hooking, and knitting. I found we could linger a bit in a gizmo rich booth to discuss form and function, adding an engineering slant to our visit. Looking at yarn was a brief pet and a quick mental note for me, never spending too long standing in one place and risk pushing my partner’s patience. 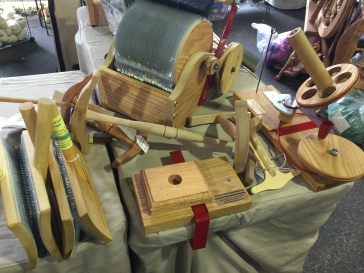 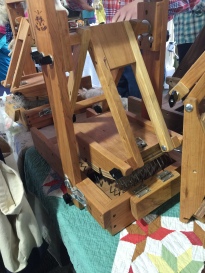 One booth had floor looms available for hands-on instruction. It was rather fun and, unlike spinning that would produce even more yarn for my stash, a loom would do the opposite. Weaving would consume fiber much faster than knitting it. Something to consider; the estimated years to work my way through my stash might exceed my lifetime. The question is, would my beneficiaries prefer legacy stash or woven placemats? The most basic two-pedal floor loom was over $1000 and, although I considered it and took their business card, that is a lot to spend for a one-day-I-

might-like-to-do-this whim. Still, I may keep my eye out for used looms or opportunities to borrow one. There were also beautiful hand carved yarn bowls in lovely smooth woods that tempted me. There were beautiful ceramic ones too, but being a bit of a klutz I think wood might be more practical than ceramic. For my wish list, I might consider that a yarn bowl would fit under a Christmas tree more easily than a loom and would certainly be a better fit for Santa’s budget.

The one thing that moved from wish list to shopping list was a Strauch swift. I had seen them on the Woolery site and they looked nice–and looked tempting–but trying it at the Strauch Fiber booth convinced me that it is a must have. I love my Strauch winder but it can be fussy, a bit like an Italian sports car. When it winds smoothly, there is nothing like it for zip-zoom creation of center pull cakes, particularly with large or heavy skeins. But when it is not winding smoothly, the yarn falls off track and 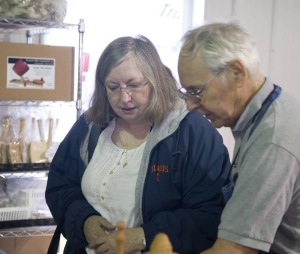 it can quickly go from firm cake to free form mess if not caught and remedied right away. From my visit at the Strauch booth I learned that a jerky swift is the enemy, a precision crafted one with ball bearings and made in a choice of beautiful woods is the answer. When I tried winding with both the Strauch swift and winder, it ran as smoothly and swiftly as a freshly tuned Italian sports car. There will be one in my near future.

We did find many interesting crafts besides knitting, even one that we could both could find interesting that combined bicycles and fiber. The spouse might want to keep an eye on his bicycle wheels in case I got

ideas, or I may have to keep an eye on my fiber in case he does. A vendor from Sweden brought some traditional pelts that were sheep fleece on one side and painted skins on the other. Not only were they very unique and beautiful, they would be the perfect thing to hunker down with on a cold winter’s night. Or so I thought until I asked the price. Unfortunately, with a price tag over $1000 USD they were not throws I could leave about, not the practical relax, munch popcorn, and watch TV lap blankets of choice. Made from traditional Gotland sheep, these were heirlooms. We also saw rugs, artistic felting, a hand spun skein competition, and lots and lots of raw and hand-dyed fleece. 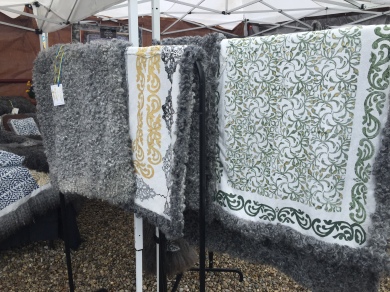 I headed towards the exit with a firm determination to get a precision made swift, an interest in a loom and wooden yarn bowl, and an appreciation of many of the fine

crafts but I was empty handed. Halting at the exit gate, I returned to one of the many friendly booths who’s yarn had stayed in my mind, A Yarn Well Spun, and selected a pair of socks, some assembly required.

I thoroughly enjoyed my visit and think the spouse did too, if not quite so much. Although I did not spend the time carefully perusing the yarn vendors–as I would have done had  I been on my own or with a like-minded partner in crime–I was impressed with what I saw. The fiber vendors seemed to be mostly small independent businesses, there were not many displays of large company’s name-brand yarns. It was a special treat to see so many unique hand-dyed and hand-spun fleece and fibers on display. There were also a lot of natural undyed fibers that were beautiful in their own way. Although I got more of  a big picture view of the festival than my usual putter and peruse visit to this sort of event, I saw many interesting and wonderful things in the moderately sized festival. I am so glad to have had the opportunity to attend.

The festival provided continuous shuttles between the fiber fair and the dog trials. It is difficult to describe just how huge the competition area was for the trials, suffice to say that when each dog was released on one end, the sheep on the other looked like little dots. Everything we know about dog trials we learned from others sitting in the bleachers with us. In other words, this is what we understood to be the rules.

Briefly, when it is their turn, the handler and the competing dog stand by a pole until they are given the signal to start. Meanwhile, very far away a horse and rider and an

official dog who works for the organizers bring three sheep out to a spot in the pasture. The competing dog is released while the rider on the horse and official dog withdraw. The dog races from handler to cluster of sheep, skirting the perimeter of the pasture so s/he can sneak up on the sheep from behind. The dog must herd the sheep to a set of gates and bring them through the gates, bring them to another set of gates and herd them through those, return to the handler, separate one sheep out from the other two for a set amount of time, and herd all three of them into a little pen. The handler, meanwhile, issues all commands using a whistle. Once in the pen, the competition is over but the dog can then proudly herd them toward a little pasture outside the field of competition where they are greeted by a second “official” dog. The official dog brings the befuddled sheep into the final enclosure. The dog has eleven minutes, and if s/he does not finish, the official dog is sent out to end the run and bring the sheep to the outer pasture. This is humiliating for the competing dog. Each dog starts with 100 points and points are deducted during the course of the run. It is both a judged and a timed trial. 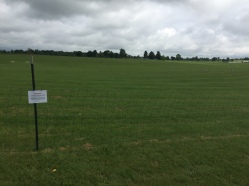 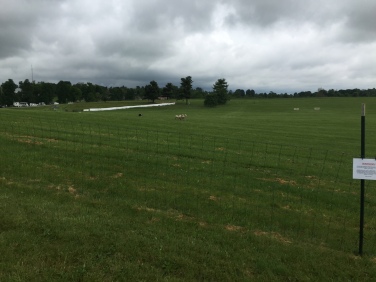 The first dog we saw completed the course in less than 11 minutes and had around 60 points. The second dog took off running at great speed and got the sheep to the first set of fences fairly quickly but did not complete the run before time was up. The third dog we saw really struggled, perhaps s/he was a young and less experienced dog, and had not successfully brought the sheep through the second set of fences when the official dog came out to gather the sheep. The competing dog upped the energy level, as if saying, “I can do it, I can do it, I CAN DO IT!” An increase in energy failed to convince the official dog that the little guy was a mighty sheep herding beast, the look the official dog gave him said, “Out of the way puppy, watch how this is done.” As the official competently and quickly herded the sheep to their new pasture, all the while ignoring the other dog, the little guy continued to run around them as if s/he was the sheep master. The next dog we saw did much better, doing all the elements and almost completing the run but was about a minute too slow. The last dog we watched completed the elements and beat the clock.

We just watched a few dogs, and would have stayed to watch more were it not for our rumbling bellies wanting lunch and our travel plans for the day. We were fascinated by the use of the whistle. The sheep were so far away that we could not imagine how the dog could hear the whistle when s/he was at the furthest point from the trainer. The different tones signaled the dog to stop, crouch, move the sheep right, move the sheep left, and so on. It was only afterwards that I thought, wait a minute. How does a dog know left from right? People struggle with that concept, think of how many times we have all heard, “No, the other left hand.”

We were also impressed by how well

behaved the dogs were as the hung around the area waiting to participate. Most of all, we were impressed by dogs knowing what to do in such a huge open space. We wondered where they were able to train for such a thing. Unlike the Sheep and Fiber Fair where the spouse good naturedly wandered about for my sake, I think we both enjoyed the dog trials equally.

It was an interesting day with beasts of fiber.

Next up, our travels in Kentucky.

One thought on “Beasts of Fiber: A Day at the Kentucky Sheep and Fiber Festival and Bluegrass Classic Stock Dog Trials”