I had a request to create a video for how I purl. It is one of those things that I had not given any thought to–just something my hands do on their own–but the request caused me to pause and give some thought to it.

I learned to knit English style, holding the yarn in my right hand, but was intrigued by other methods that looked more efficient. In one class I learned a few different methods, including the Portuguese style where I tensioned the yarn around my neck. A friend of mine knits with this method and swears by it, but although the purl stitch is quicker and easier with the Portuguese method, it is the knit stitch that becomes the more difficult one. Win some, lose some.

What I really wanted to master was the continental method where the yarn is held in the left hand and the hand movements appear more subtle. I must have had three or four classes in which I was able to knit continental while in the class but lost it in the days that followed. The knit stitch was easy but the purl stitch presented more of a challenge. It was when I learned the Norwegian purl that I found myself able to keep it up after the class; but to me the Norwegian purl was a lot of movement, certainly no faster than the method I already knew. It was not until I took a class with Leslie Solomon at Stitches West that the lightbulb went off. Her method was to rotate the left hand down, bringing the tensioned yarn over the needle and making it easier to grab.

In the weeks following, I switched off between continental and English, soon finding it just as comfortable to knit with the yarn in my left hand. The advantage was that it seemed less stressful on my hands, and faster too. Knowing both is fabulous for doing colorwork and I can knit with both hands pretty comfortably. But there is a dark side. When I knit English style, my gauge is usually spot on with yarn labels and pattern 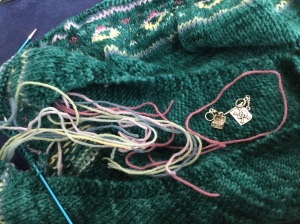 specifications for needle size. The more relaxed and rhythmic continental style is much looser, typically I need to go down at least 2 needle sizes to get gauge. For stranded knitting, my gauge is very tight and switching from a single color knit with one hand to a band of stranded color work knit with both hands requires going up a needle size or two as well as really concentrating on keeping my tension loose.

As time went by, my purl stitch evolved into something very similar to my knit stitch in the angle I insert the needle with my right hand and the angle in which I tension the yarn with my left hand. It is just something my hands started to do without consciously giving thought to it. For the most part, my rows are fairly even in stockinette on both the knit and the purl side, so I do not think it is a bad thing. It just is. It was not until someone in my knitting group asked me what I was doing that I gave any thought to it at all. It is not necessarily the right way, the recommended way, the best way, or the most unique way to purl, but over time it has become my way.

Note: in the video I did not stop to move my stitches up on the needle as I normally do so I was fighting a bit of drag on my stitches while trying to talk and knit at the same time. I was also reaching around a camera stacked on books, so it was all a bit awkward but I think it shows the angle of the needles and the tensioned yarn fairly accurately. But my goodness (shudder), watching it certainly makes me want to work a bit more on my technique. Perhaps a bit more mindful practice and a bit less mindless evolution should be in my future?