I have not yet succumbed to the siren song of sock knitting. Opinions differ as to the best method for knitting socks, and few have opinions so strong as those of sock knitters. But with so many knitters turning out pair after pair, carrying their projects about in adorable project bags, and spending small fortunes on skein after skein of drop dead gorgeous sock yarn, I can only think that I am missing out on something fabulous and all engrossing. How do I go about mastering this?

I have made forays into the abyss before.  I took a class for knitting  two-at-a-time socks top-down on two-circular needles.  I bought the book. I knit a pair of men’s socks for my daughter’s boyfriend that were positively mutant–sized for a giant–and quickly frogged them back to their original state, a ball of yarn.  From cuff to toe I knit them again.  Although I would love to report a happy ending, practice did not make perfect and, although somewhat improved, they were just awful.  Nevertheless, I wrapped them up in pretty paper and gave them to him as a Christmas gift.  They broke up.

A year later I took a class for knitting two-at-a-time socks toe-up on two circular needles. I bought the book. I knit another pair of socks for my daughter’s boyfriend, toe to cuff and much better than the first, wrapped them up in pretty paper, and gave them to him as a Christmas gift.  They broke up.

My mother and I used to spend time knitting together when I lived close by.  She often spoke about how much fun she had knitting socks, well fun except for the darning heels part when my father wore through them.  Thousands of miles away and remembering those conversations, I was inspired to buy her a few skeins of sock yarn one Christmas.  Sadly, the last time I visited her she handed me the yarn, still in the gift box, declaring that she was no longer able to knit.  I brought it back with me and with great sadness put in on a shelf where it has sat for over a year.

Sock knitting has not brought me happiness.  Yet with watching pair after pair of socks come off needles in my knitting group, listening to a recent podcast from the ever encouraging Prairie Piper featuring the joy of knitting socks, and finding out about a free sock knitting class taught by the ever entertaining Lucy Neatby on Craftsy, it seemed like the right time to once more stick a toe in the water.  First, I did something that I rarely do with a Craftsy class, I watched it.  What inspiration it fired deep from within. Yes, I think I can take 5 little pointy sticks no fatter than toothpicks and create a foot covering.  Maybe even two foot coverings.

The box of sock yarn was right on the shelf where I had left it so many months ago.  I wound the skeins into cakes of yarn, ready to be confronted by 5 tiny pointy sticks and assembled into lovely socks.  I like my daughter’s current boyfriend very much. If 5 tiny pointy sticks do not lovely socks make, they will go into my own sock drawer.  If by some miracle they become the lovely socks that exist so vividly in my imagination, I will return the gift to my mother as socks in place of skeins of yarn.

No lifetime warranty included, she will have to darn her own darn heels. 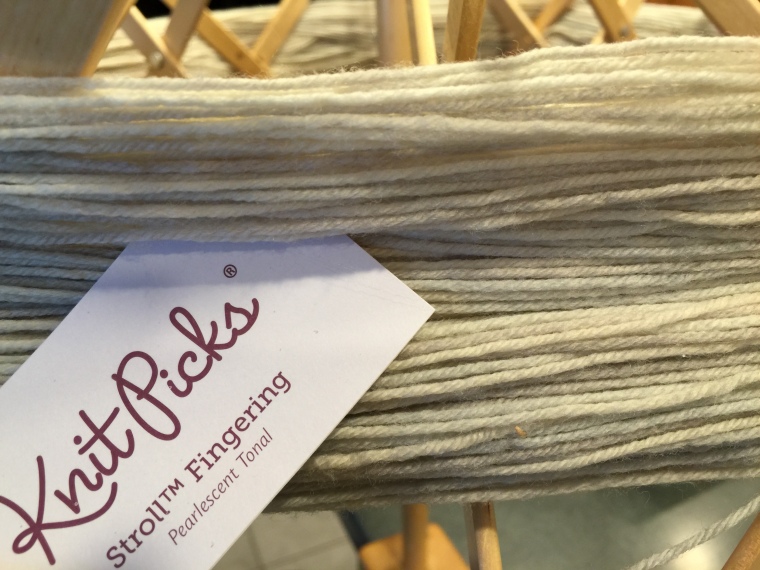 One thought on “Toe in the Water (TITW Part 1)”