After the many hours of planning, knitting, and finishing, the last thing I wanted to have pop in my mind when washing my project was, “OMG, it looks like the shower scene from Psycho!”

For those who are too young to remember the 1960 Hitchcock movie, there was a gruesome scene in the Bates Motel involving a woman traveling on her own, a shower, a knife, and a psychopath wielding it. The scene pretty much went from setting the scene with all those components, a shot of the woman screaming, and a cut to a great deal of blood running down the drain. Hitchcock was a master, he did not need to

explicitly show everything to scare the holy heck out of people. It worked, I saw it as a child and that final image from the scene is imprinted in my brain. I would not get into a shower shawl for weeks, opting for a bathtub and a securely locked door. When I finally did brave a shower stall, I had just sudsed up my hair when one of my brothers flipped off the light switch, let out a long howl, and ran into the bathroom with a big Halloweeny blood-coated rubber knife. It was to my mother’s horror when, moments later, I ran screaming through the living room–where she was sitting primly with guests–barely covered in a towel, streaming water and suds in my wake.

I knit a cross-over shawl, by that I mean something between a shawl, a cowl, and a poncho: looks like a shawl in knitting style but drops over your head as something larger than a cowl but smaller than a poncho. The yarn was a gradient in reds, the month December, and the project still too short when the skein was nearly gone. I happened to have some white yarn in the same base and, well why not add a little white border with some sparkly beads?  It was adorable, putting it on made me want to get in touch with my inner Marilyn Monroe and dance about lip syncing Santa Baby. Then I washed it. Evoking images of the shower scene was the last thing I wanted when soaking my project for blocking. But there it was, the basin filled with red, rinse after rinse after rinse. The border went from snowy white to peppermint pink. I really, really tried to like my pink peppermint trim, but I think I have worn that thing once or twice and, rather than Santa Baby, all I could think of was Sugar, Sugar. I hate that song. 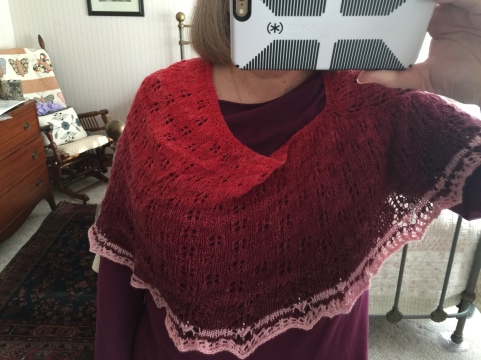 Yes, a certain amount of preparation and planning is necessary before starting a project, but I just want to knit not prepare to knit. I know it is important to read the pattern carefully, a quick scanning before picking up the needles will seldom do. Do not ask how many times it took for me to learn that lesson. It takes all my strength of character to stop and swatch, and only then when I think gauge is going to matter in the finished product. Sometimes even then I fudge it by dropping down 2 needle sizes and hoping for the best. Like with a hat; I figure if I am charity knitting that–no matter what size the hat comes out–someone will have a head big or small enough to fit it. Getting gauge for a test knit is painful. Clearly I am just a loose woman because I have to keep going down, down, down in needle sizes to get anywhere near the designer’s stated gauge, knitting many a swatch along the way. For a shawl, what is the worst thing that can happen, other than knitting something too big or too small or running out of yarn? OK, I admit, the answer could be a peppermint pink border. This is all to say, I really do not want to add even more extra steps to my pre-knitting.

My imagination was captured by Melanie Berg’s On the Spice Market shawl and I started following the KAL thread on Ravelry. Someone brought up, horrors, color-bleed. There was some discussion on the thread, but the most useful comment was a link to the Miss Babs thread where color bleed was discussed in great gory detail. In particular, Miss Bab’s post number 19 provides a detailed explanation for why some yarns bleed and what her recommendations are for preventing it.

There were many  warnings, hints, and recommendations in the thread and, as usual, there were things that one person swears by that another would never do. But the basic takeaway was this: if you are going to mix colors, pre-wash your yarn. Especially yarns that are red or purple, and especially if those reds and purples are going to be mixed with lighter colors. Some people swore by Dawn liquid. I think I will take a pass on that one, when we had to quickly make up a DIY skunk wash for the dog at 6:30 one morning, the recipe we found called for hydrogen peroxide, baking soda, and Dawn. Not generic dishwashing liquid, Dawn. Anything that is strong enough seek and destroy skunk stench might be a bit much for my fluffy little knits. Others swore by shampoo for color treated hair. Some people warned against using wool wash. Still others recommended soaking in vinegar and water. Miss Babs said she used a mild hand soap and that she recommends pre washing her yarns, particularly if colors are mixed in a project.

So this is all interesting to me because three of my projects–one about to start, one in its infancy, and one nearly done–all involve light backgrounds with darker contrast colors. It is too late for the one that is nearly finished, the one with deep dark magenta highlights on a white/multi background. All I can do is hope the verigated pattern disguises magenta escaping its borders into the white. But for the others, sigh, looks like there will be a knitting delay to pre wash the contrast colors.

From reading and sorting through the thread, here is my game plan. First, make sure the yarn is made ready for a bath by using a contrasting yarn and tying the skein in at least 4 places. I am inclined to stick with my tried and true Kookabura wash in spite of what some people said, but I am going to use color capture sheets to be on the safe side. I will soak it for about 20 minutes, rinse, and repeat until the water runs clear (no Psycho shower scenes), wrap it in a towel, spin it inside the towel in my top loading washing machine, and hang it on a wooden dowel rack to dry.

I can read my patterns carefully while my yarn dries, but I will not be taking more time to swatch when it finally does. Besides–if I miscalculate and run short–I know how to make sicky sweet peppermint pink yarn. That goes with everything, right?

2 thoughts on “Looks Like the Shower Scene from Psycho”