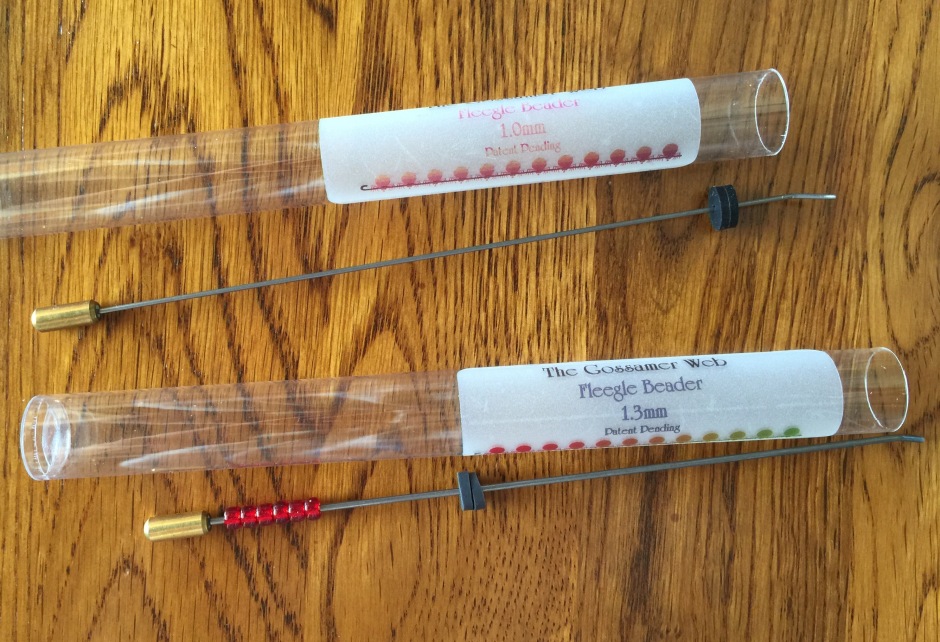 Having a strong preference for one approach over another may have just as much to do with what one knows and is comfortable with as with which is actually the better approach.

A few years ago I took a my first introduction to knitting with beads class. We tried three different methods for placing beads: a crochet hook, a Fleegle Beader, and SuperFloss. I was not an instant success. Straight out of the gate I shredded the heck out of my yarn with the Fleegle Beader, accidentally used the floppy end instead of the stiff end on the SuperFloss, and eventually, after much struggle, managed some success with the crochet hook. At the end of the class I was firmly in the crochet hook camp.

Back in the real world, facing my first project with beads, I found out the hard way that a crochet hook can do some yarn shredding too. That led to blaming the tool, not

the user, and I sought to resolve the issue by ordering hooks in various different brands and sizes. In the meantime, a YouTube search showed me the error of my ways with the SuperFloss and, lo and behold, if I used the correct end the floss method actually worked just fine with no damage to the yarn. Possibly I was just as mistaken about the Fleegle Beader as I was with the SuperFloss, I ordered one of those as well.  What I did not realize then, but know now, is the hole size can vary greatly from one brand of beads to the next, and even from one bead to the next within a brand or within a single tube. It is not just having tools that brings success, it is all about learning how to use tools correctly and understanding the materials I am working with. My take on all of these tools is summed up in Placing Beads in Knitting. So many people swear by the Beader I thought it deserved to be taken for another spin. After all, everything feels awkward at first…

Being the proud owner of 2 sizes of Fleegle Beaders–and facing a large number of bead placements on the Amulet Shawl by Helen Stewart–I decided to give the Fleegle Beader a second chance. It was slow going at first, playing with different angles and 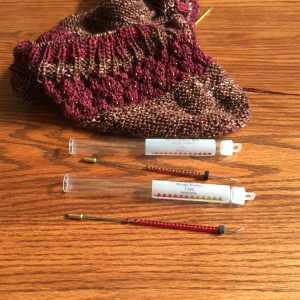 approaches, until I found something that worked fairly comfortable with the larger 1.30 size. All was going swimmingly until I switched from Miyuki beads to Toho beads and found that the holes in the Toho beads were somewhat smaller and somewhat less regular. At first I thought I had mistakingly grabbed Toho 8/0 beads instead of 6/0, but no, they were the same 6/0 size as the Miyuki. In spite of having worked out a method for consistently placing beads without damaging the yarn with the Miyuki’s, I was back to square one with the Toho beads.

A few tight beads and shredded stitches later, I switched down to the smaller 1.0 size and that helped a bit. Unfortunately some of the beads were still too tight; they would fit onto the shaft but were too small to accommodate the shaft of the Beader plus the strands of yarn. I played around with different methods again and, although I had to toss a few beads aside that were too tight, I did come up with a method that worked pretty well. It goes as follows:

Pinching and tightening the stitch makes the yarn taught and compact, allowing more wiggle room for the bead to slide off the Beader and onto the stitch. I was able to hold it in my hand while I knit, saving me the extra hand motions of putting it down and picking it up, but there was one problem. With the cap off the top of the Beader, I had to be careful to not inadvertently push the beads off the Beader. Stopping to pick up beads was not an added efficiency.

After a fair amount of practice, I can understand why Fleegle Beaders are so popular with some knitters. With beads stored on the shaft, it really was the fastest method for placing beads of all the methods I tried. Overcoming my reluctance to revisit it was worthwhile, eventually I did find a method that works fairly well for me. Going forward I will use the Fleegle Beader when I have projects with lots and lots of beads. For mobile projects, I will still stick with the more portable SuperFloss method on the road for carrying and placing beads on the road. For projects with just a few beads here and there, I will probably just use the simple and easy crochet hook method.

In the end I am glad I kept an open mind and gave the Fleegle Beader a second chance. It will be another useful tool in my bag of tricks.

An aside: Using a thin wire shaped like a V was discussed in the Amulet Shawl KAL thread and I did give it a try. For those who do not have the tools, it is worth trying, but I do think the tools I have work better for me. As with anything, it is all a matter of personal preference. It is certainly easier on the pocketbook.